Happy new year to my favorite people on the internet and shout out to my dad, CFB’s newest fan. I introduced him to my blog when he came to visit for Christmas and he swiftly declared he’d be a devoted reader for life despite the genetic obligation. Thanks Pop!

I have to first apologize for the delay between new submissions. Turns out the holidays were not the thing keeping me busy. It was just plain old life and being the mom of a 9 month old who will not. stop. getting. sick. and in turn gets Dave and I sick pretty much on a monthly basis.

Before I had a kid, I had no idea you could legit get sick every single month. At this point there is no being “well” in our house. There is just Sick and Waiting To Get Sick. Those are the only two states of being our little family enjoys these days and the amount of money I’ve spent on cold medicine in the past 9 months is starting to rival my mortgage. By the way, Walgreens workers, when someone is checking out with $40 worth of nyquil, maybe you skip your spiel about the sale on Pringles. I’m all set, thanks.

I’ve been told by moms of older germ carriers that the first year is always the hardest and after those booger filled 12 months have passed, my kid and myself will both have immune systems as impenetrable as my devotion to any true crime documentary Netflix spits out, so Cheers to that as I raise my glass of cough syrup and wash down another vitamin C pill. Bully!

Where were we? Ah yes, resolutions. Resolution time is upon us. I feel like resolution obligation has really ramped up in the last decade or so. Much like the drama in holiday perfume commercials starring Julia Roberts jumping into a pool of diamonds. Why the pool of diamonds? Because fuck you, buy Chanel, that’s why.

It seems like every year we get a new celebrity weight loss endorser and I don’t know about you, but I wait with breath that is baited to see who our next D-list sacrificial lamb will be. I’ve often wondered if when an actor sees their career going south they just say “Fuck it, time to get fat” in anticipation for the call from Ms. J Craig herself. It’s pretty much an instant comeback and then once the weight is lost you can gain back like a good 20 and the Food Network gives you your own show where you declare potatoes, not size two jeans, have always been your true love.

For some inexplicable reason, Oprah also returns every year as the face of heath and weight loss foods. I think she shook hands with Weight Watchers sometime back in 2015, but as far as I can tell, Chicago’s former pride is still pretty fluffy. So tell me, why am I supposed to buy frozen pizza with her mug slapped on it? The jig is up, Op. You’re not Gisele.

Sorry, somebody had to say it.

One of my VERY favorite things about this time of year are the checkout line magazine covers donning celebs who’ve lost weight with the words “HOW THEY DID IT! FIND OUT THEIR SECRETS!” splashed across the front. Obvi I buy them because a $5.99 purchase is surely the only thing keeping me from being Halle Berry and of course the news is always the same, but it’s packaged in the most BS way possible. “Make good food choices” = throw out your pantry. “Park as far away from the store as possible” = hire an expensive AF trainer who will beat you into skinny submission. “Do yoga daily” = fuck off Aniston, nobody has ever lost a pound doing yoga.

I would LOVE for these celebrities to REALLY open up about the almond an hour diets and marathon dreadmill sessions that actually get them to where they are, but that’s not aligned with the body positivity movement that’s so posh right now. So I suppose we’ll have to continue eating up their finely packaged BS and wonder why taking the stairs isn’t giving us Beyonce’s ass.

Even though I embarked on my own weight-loss journey back in October with Whole30, I started this year with a new goal because I’ll be traveling to Puerto Rico in February for a wedding and my bikini bod is still hiding somewhere under 10lb of Halo Top ice cream that, I’m sorry, basically BEGS you to eat entire pints of.

I wish I could quit you, HT.

So January 1st started out with two goals:

1. Participate in something called a DietBet where you put up a sum of money and bet that you’ll be able to lose 4% of your bodyweight. If you do, you get your money back plus a portion of all the money that the people who didn’t hit their goal put in. So basically you’re betting on you to win and other people to fail.

2. I realized sometime around November somethingth that despite calling myself a “runner” I hadn’t actually run a single mile since that Half Marathon I did at the end of September. The training for that sucker had been so hard as a new mom with all the infant obligations that I’d pretty much hung up my running shoes in disgust as soon as I’d crossed the finish line, but now, months later the itch was returning… along with my ass so it was time to go back.

In order to achieve this I set the goal of four runs a week and paid for an app from a popular company that I can’t say the name of because they’re a direct competitor to the company I work for, but the name begins with a P and rhymes with Meloton, so you do the math. My company doesn’t currently offer an app that provides on demand running classes, but when they do, I promise I’ll be canceling my subscription to Meloton with a P to join the ranks of the good guys.

In other words, please don’t fire me, company I work for with a C.

As for the DietBet portion of my January, I entered myself into two different games just to REALLY ramp up the motivation. One of them was a small group of 8 friends with a $35 buy-in and another was a public group started by someone I follow on Instagram with 400+ participants and a $10 buy-in.

I’ll spare you the boring diet details, but the month went basically like this: I counted calories, didn’t even dare to LOOK at a carb and pretended that a single Hershey kiss after dinner was totes as good as a bowl of ice cream. I know our bodies are built to want the right amount of calories that would keep us pretty slim and trim. So why TF do I want to motorboat a freshly baked loaf of bread more than anything in the world? If I ate the way my brain told me to, I’d be obese inside of a week, so it was basically a month of going against all my instincts. At the end of the day I guess I’d rather strut my shiz in a binki along the beaches of Puerto Rico than hide in the darkness of my pantry and inhale a box of cupcakes.

Cut to March when Dave finds me cowering on the floor of a darkened laundry room covered in chocolate as I claim we must have sugar rats.

The month blew by and before I knew what hit me, it was weigh in time. Since this was an online bet, there was a whole process required to verify weight that began with taking a photo of my feet on a scale with a special word-of-the-day written on a post it note next to the scale (a la hostage holding a daily newspaper) followed by a full body mirror shot of you standing on the scale.

Now keep in mind, I am not that big of a person so losing 4% of my body-weight isn’t a ton AND as we all know, scale outputs fluctuate like crazy. I can easily weigh a full 5lbs more after my morning gallon of coffee, so needless to say I was super worried about where the scale would land on weigh-in day despite my confidence that I’d actually lost the necessary weight. On January 30th, I shot out of bed and b-lined it to the scale. MIRACULOUSLY I was the exact perfect weight for one of the games, so I went ahead and took those photos. 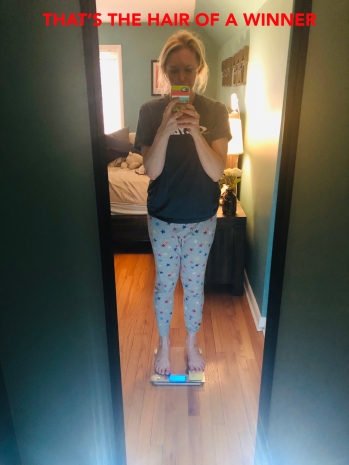 Then, I went to take photos for the next game and I was .2 lbs over….

So I ran around the house putting the scale in different spots and stripping off all my clothes hoping upon hopes I could get it back to the right weight. Honest to God, I legit considered cutting my hair off. Maybe if I trimmed my nails? Who really needs TWO thumbs anyway?

All logic and rational thought had gone out the window.

While I wasn’t able to get it back to my “correct” weight, I was able to get it to show me a weight that was 15lbs lower than my actual weight. Why? Who the hell knows, so I said fuck it. You don’t get extra money for losing MORE than 4% of your body weight, so I rationalized that this wasn’t cheating in any way because I knew I’d lost what I needed. This would just have to do.

So I submitted the 20lb weight loss. Aaaaaand was immediately disqualified from the game for losing TOO MUCH weight.

I guess you get instantly tossed from the game if you report over a 12% weight loss because ethics (blech), so my 20lbs got me ejected. I suppose you could say the “real” prize was the weight loss itself, but that won’t pay for the new scale I apparently need. I did however win in the other game I’d submitted the correct weight to and for that I won, wait for it…

That’s right folks, I won PI by not eating pie (credit for that little revelation goes to Justine!)

All in all, I guess participating in DietBets gave me the motivation I needed to get shit done, but at the end of the day the stress involved during the weigh-in process and added pressure of a time limit just wasn’t worth the three bucks and change. I think Dave summed it up best when he told me, “You find the weirdest things on the Internet.”

As for my running goal, me and the Meloton trainers became very closely acquainted as I enjoyed 30-60 min HITT, hills and fun runs. I also bought myself a pair of adjustable hand weights and have been taking 10 min strength classes in the hopes of turning my chicken wings into drumsticks.

I was able to keep that 4 days a week goal RIIIIGHT up until the plague descended upon our house last week and brought everything in its tracks to a screeching halt. So I’m blaming my daughter for not reaching that goal completely because if you can’t blame your kids for stuff, why do you even have them?

Annnnnd that brings me full circle.

All in all I’m giving myself a B+ on resolutions thus far. If the change in tide of the Food Network shows from Low-Cal Feasts to Comfort Food Fiestas is any indication, the resolution wave is already waning and everything will go back to normal soon enough. I’m hoping to continue the habits I’ve formed, but no matter what happens I think we can all agree that Aniston sits on a yoga mat of lies.